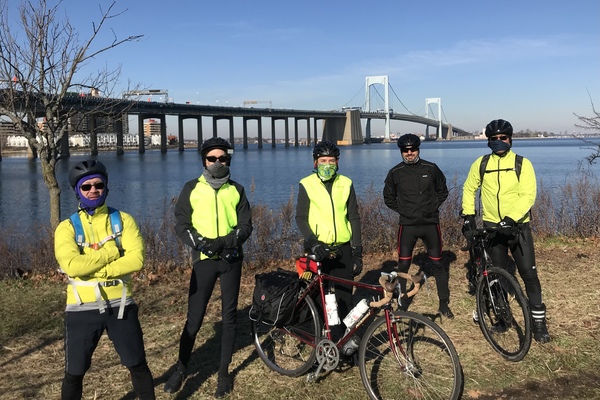 Once again we're sticking (kinda) close to subways in case the weather is a problem for anyone. This time we're exploring Northern Queens. Here is the route…

We'll start at Astoria Park (in Astoria). For those coming from Upper Manhattan or the Bronx you can ride over the JFK / Triboro Bridge from Wards/Randalls Island (though technically you're supposed to walk your bike over).

Here's the supplemental route for those headed to the Williamsburg Bridge:

The routes are not finalized (especially the Williamsburg Bridge option), so please wait to download them until right before the ride.

The 7 line is available at mile 6 and 7. Then there's nothing until a LIRR station near mile 15. Then nothing again until the E/R train at mile 27. Then there are lots of subway options towards the end of each of the route options.

The forecast is for right around freezing when we meet (don't be late – we don't want people waiting in the cold) with temps going up to the high 30s. Wind chill is forecasted to be in the low to mid-30s. This is a true cold weather ride, so dress appropriately!

It's expected to get up to 60º Thursday evening into Friday morning with fairly heavy rain. That should get rid of a lot of the snow and salt. That said, Saturday is right around freezing all day, so there may be patches of ice. Winds are forecasted to be from the west, so the portions of the route along the water shouldn't be particularly bad. Given the urban nature of the ride, and the fact that flat bar bikes are somewhat more stable in icy conditions, you may want to do the ride on your hybrid (if you have one).