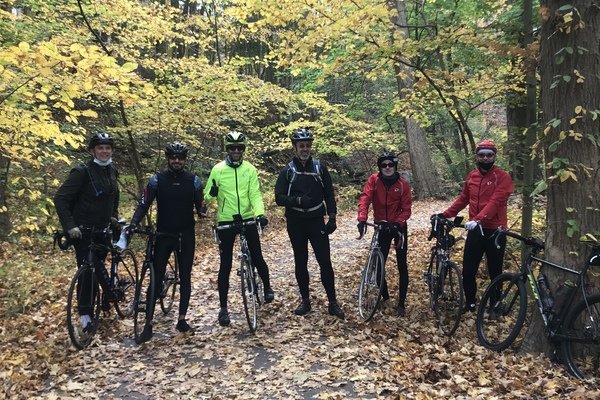 Every summer the Westchester County government does "Bicycle Sundays" where they close down a portion of the Bronx River Parkway for a few hours every Sunday so it can be used by cyclists and pedestrians. Thanks to COVID and the need for local outdoor recreation, they've extended that program and this Sunday is the last Sunday that they'll be doing it this year.

Sunday should also be a pretty decent day for fall foliage along that section of the Bronx River Parkway. This past Sunday I rode MetroNorth up along the parkway and some places were just changing while others were already at the midpoint for fall color. So there will be decent fall color much of the way, with pockets of really great fall color.

There is a small section of relatively pristine gravel that is skinny tire friendly. Otherwise all the trails are paved. The pace will be 15± mph, though we'll often be going slower on multi-use trails.

The weather on Sunday will be significantly colder than Saturday. Dress for feels like temps in the mid to upper 40s for much of the ride, with the feels like temp getting up to the low 50s as we get back into the City. There are MetroNorth and subway stations every few miles along the route in the event you're cold and want to cut the ride short.