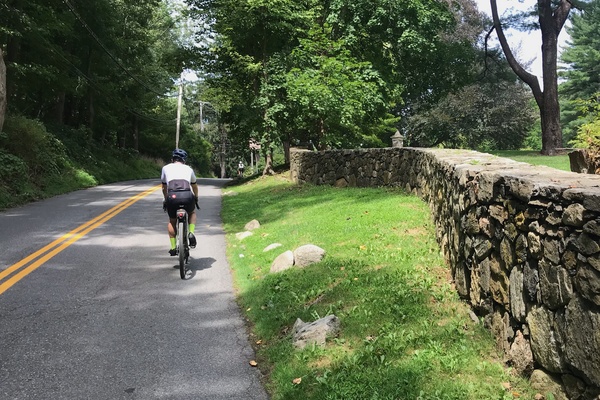 Century Riders then climb to the top of the Kensico Dam where there's a great view, then head north to the Whippoorwill Club and then over to Armonk.

After Armonk the Century riders head north through Mt. Kisco and Bedford to the Ward Pound Ridge Reservation. Things start getting pretty hilly in this section of the route, but most of the climbing is on beautiful, quiet country roads.

The hills continue after Ward Pound Ridge Reservation as the century route takes riders through Pound Ridge, Scott's Corners, North Stamford and Greenwich before getting to Purchase.

The route back from Purchase skirts the edges between a lot of well-known Westchester towns – Rye Brook, Scarsdale, White Plains and Eastchester (to name a few). It's mostly all quiet residential streets until you get to Mount Vernon.

The full 98 mile route ends at Gun Hill Road in the Bronx where you can either take the 2 or 5 train that's a couple blocks away, or take one of these routes back to Manhattan…

How to shorten this ride:

42 miles - You can catch MetroNorth in Bedford Hills. It's just a short distance off the route.

67 or 71 miles - You can catch MetroNorth at Talmadge Hill or Norton Heights if you use change to this route just after entering Connecticut:

It's a gorgeous ride that goes past Philip Johnson's Glass House. Talmadge Hill is 6 miles along the route, but it's on a spur of MetroNorth that doesn't get as much service as the main line. You can also do the full 10 miles to Noroton Heights. This is a highly recomended alternate ending for those who don't mind taking MetroNorth.

76 miles – You can also take MetroNorth from Greenwich. The station is a few miles off the route. Use Google Maps to get you to the station.