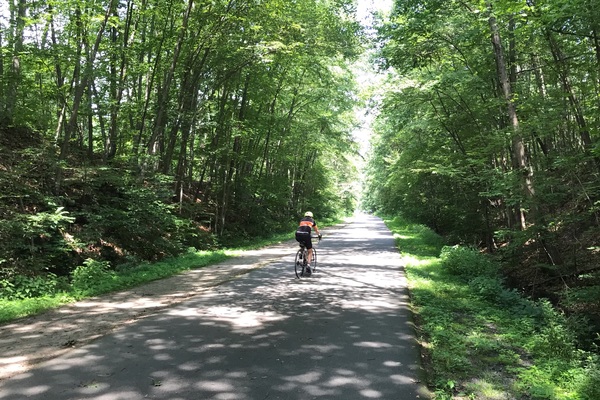 A rail trail with many names

[This ride is cross-listed with GravelNY which has both straight and gay members.]

If you're looking for a chill, car-free ride in the shade, join me Saturday for a ride starting in Poughkeepsie which takes paved rail trails for miles and miles and miles.

There are three distance options for this ride…

The ride starts at the Poughkeepsie MetroNorth/Amtrak station just after the MNR train gets into the station at 8:45. I'll be getting on the train at 125th Street at 6:56 am. (It leaves Grand Central about 10 minutes earlier if you want to get on there.) The early start time is necessary given the distance and hence the time the ride will take to complete.

We'll start by riding a few blocks and then take the elevator to the top of "The Walkway Over The Hudson". We'll go out to the middle of the bridge to admire the view then turn around and head back towards the City on the rail trail.

Being a rail trail the hills are generally really gentle. There's a 10 mile long hill on the Maybrook Trail that's so gentle (0.8% grade) that you may not even realize you're going uphill.

If you take MetroNorth back from Brewster it's 39 miles and about 1,200 feet of climbing.

[39 mile riders should use the 69 mile route shown below.]

The 69 mile Croton option splits off from the North County Trail just before it crosses the Croton Reservoir. You'll then ride on a semi-busy road for less than a mile, then cross the reservoir on the beautiful Gatehouse Bridge and ride a lovely road along the southern edge of the reservoir. Part of the road is gravel, but it's smooth - you just have to watch out for potholes. We'll then go out onto the Croton Dam. At that point you have two options to get the the MetroNorth station. I'll be going via the Old Croton Aqueduct. It's 4.8 miles, 2.8 of which are gravel. It's almost completely downhill (about 100 feet of climbing), sometimes "single track", but doable on a skinny tires if you slow down and take it easy. For the gravel-adverse, there's a 3.7 mile paved route with about 200 feet of climbing.

If you're up for an even longer ride, it's 88 miles to get to Van Cortlandt Park in the Bronx where you can catch the 1 train or continue riding home.

[The 88 mile route is a draft and probably won't be fully completed before the ride. I recommend using the 69 mile route until Yorktown and then switching to the 88 mile route. Getting back to the City on the South County is pretty simple. The food stop is Elmsford.]